A father has revealed what he did to teach his son a lesson after he mocked a boy for wearing rubber sandals to school.

Onyeka John wrote: “My son mocked a boy on rubber sandals last friday, so yesterday I bought him two rubber shoes, one for church,the other for school and locked up all his sneakers and fancy shoes, he must have sense by force #responsibleparenting” 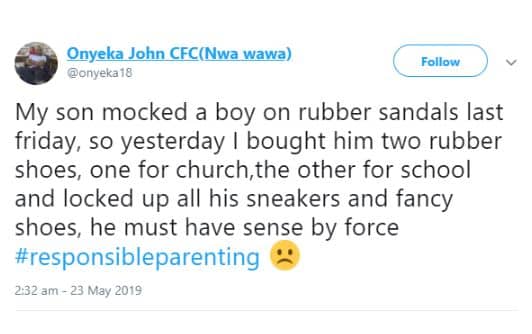 He has been praised as a good father and a number of other parents have said they will discipline their kids in the same way if they did such. 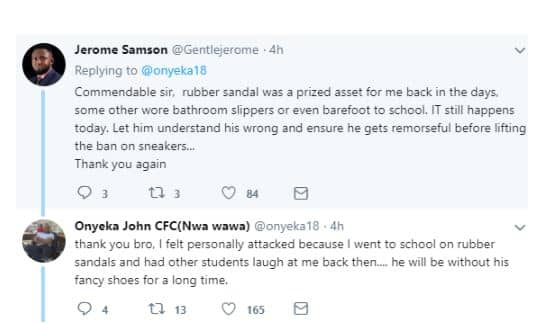 Terrydicos
Arguing that police officers on secondment to EFCC never leave, the operatives said the Federal Government should change the system so that credible civilians and personnel of other security and law enforcement agencies can...
Read more

Terrydicos
PRESIDENT Muhammadu Buhari has given the Minister of State, Labour and Employment, Mr. Festus Keyamo, SAN, permission to go ahead with the recruitment process of the 774,000 jobs across the country under the government...
Read more

Terrydicos
ABUJA – THE Senate on Tuesday passed a bill prescribing life jail for persons found guilty of kidnapping. According to the Senate, the life imprisonment is against the provisions of section 364 of the...
Read more

Those who swallowed NDDC funds must cough it out, Akpabio warns

Terrydicos
Those who used their positions to loot funds meant for the development of the Niger Delta must cough them out no matter how powerful they are, Minister of Niger Delta, Chief Godswill Akpabio, has...
Read more

Terrydicos
This resolution was sequel to a unanimous adoption of a motion of Matters of Urgent Public Importance by the Chief Whip of the House, Rep. Mohammed Monguno (APC-Borno), at the plenary on Tuesday. Moving the...
Read more

How To Create Full 360 Virtual Tours In Minutes Without Any Budget, Marketing Skills...

Terrydicos
Bitcoin rose Wednesday after undergoing an eagerly awaited adjustment that occurs every few years to limit the amount of the virtual currency on the market, building on a recent coronavirus-driven rally. So-called “halving” takes...
Read more

A Year After, Was Naira Marley’s EFCC Arrest A Blessing In Disguise? (READ)

Sanusi Oluwasegun
By Segun Sanusi | 9jainsider.com On 10th of May 2019, The Economic and Financial Crime Commission (EFCC) arrested Azeez Fashola popularly known as Naira Marley, a day after his birthday. Many are of the opinion...
Read more

Sanusi Oluwasegun
I have been worried about the rising case of infection among nigerians daily and it becomes worrisome that what we thought was a foreign infection has now taken a seat in our country. The Government...
Read more

Anifowose Joseph
Actor Adeniyi Johnson has written an open letter to ”aggrieved” married women who are currently at home with their husbands due to the lockdown and have vowed to use this time deal with their...
Read more
Load more

“No Mansion Can Equate The Life Of Anyone”, Rivers Lawmaker, Hon....

What President Buhari Said To Asiwaju Bola Tinubu To Celebrate His...

Young Man Shot On His Buttocks By Police Over Lockdown Protest...

Minister Doesn’t Have Right To Suspend Me, It Is Clear To...